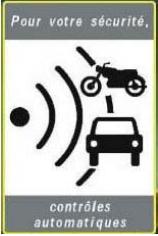 As many of you may already know the law in France regarding satellite navigation devices and speed camera warning devices changed earlier this year.

There are also two new types of speed camera that have been approved for use on French roads.

The first is the average speed camera this consists of two cameras which can be many kilometres apart, they take your picture at the beginning and the end of a measured distance and then calculates the average speed your car travelled between these two points. So if your car travelled the distance at a faster speed this would equal less time between the two photographs and a possible speeding ticket.

The second is a front facing camera mounted in gendarme/police cars, this camera is capable of taking pictures of cars it is following cars, that are passing it on the motorway, and also cars coming in the opposite direction, it instantaneously shows the speed and captures all of those going over the speed limit.

This effectively means using any speed camera warning device is banned. Devices include GPS units such as TomTom, Navman, Garmin etc. or mobile phones with GPS navigation software or dedicated warning devices like the Coyote or Inforad systems.

Check your manufacturer’s website for detailed instructions and information on the new danger point warning system. Many devices like the Coyote and Inforad systems already warn of danger points but will need a software update to comply with the new laws.

I have received a number of reports of people being asked by gendarmes at roadside checks to hand over their navigation device for inspection. Luckily those people had updated software or disabled the speed camera warnings so were not fined.

Don't leave it to chance and get caught, the update is very easy to do.